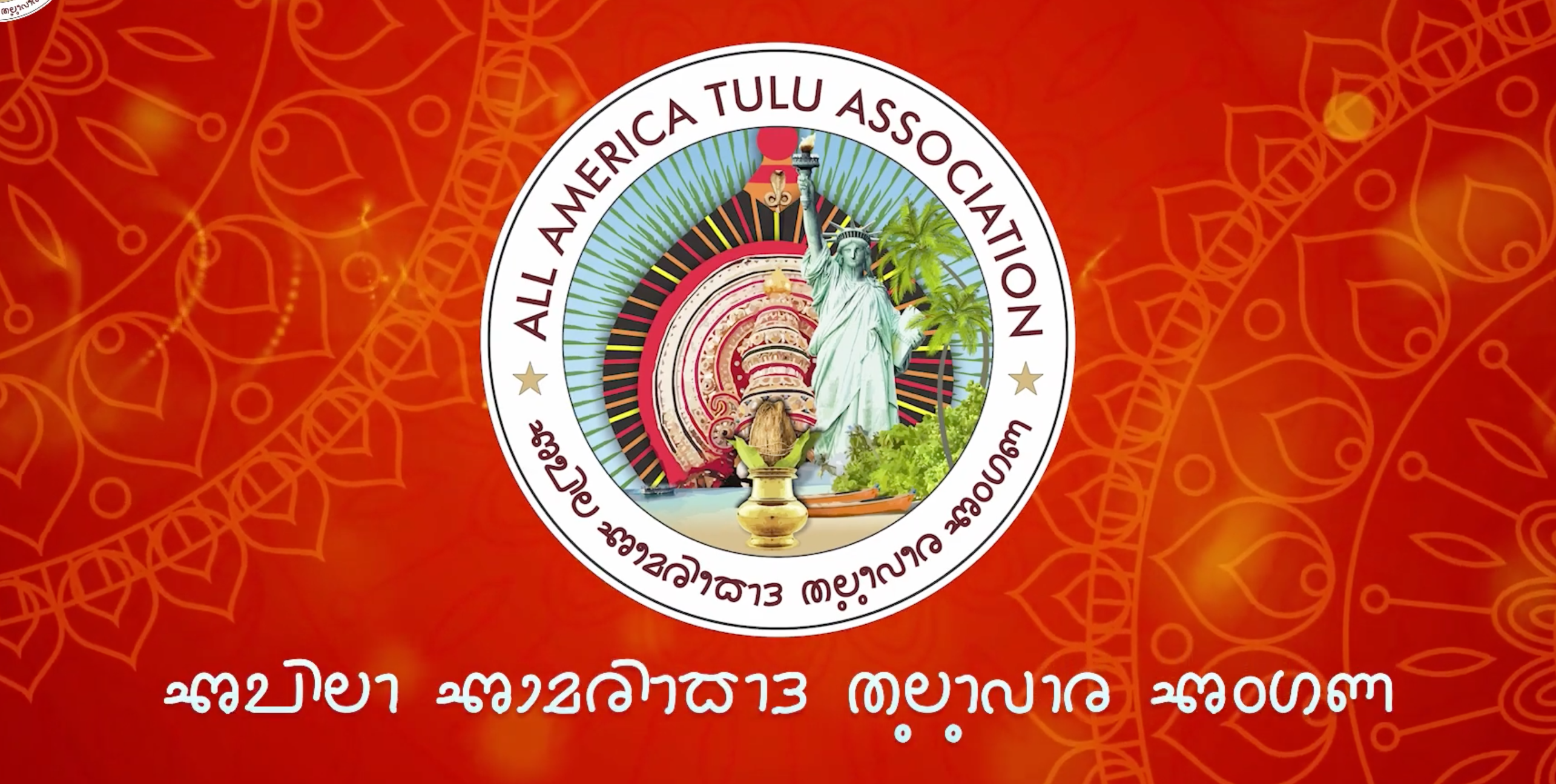 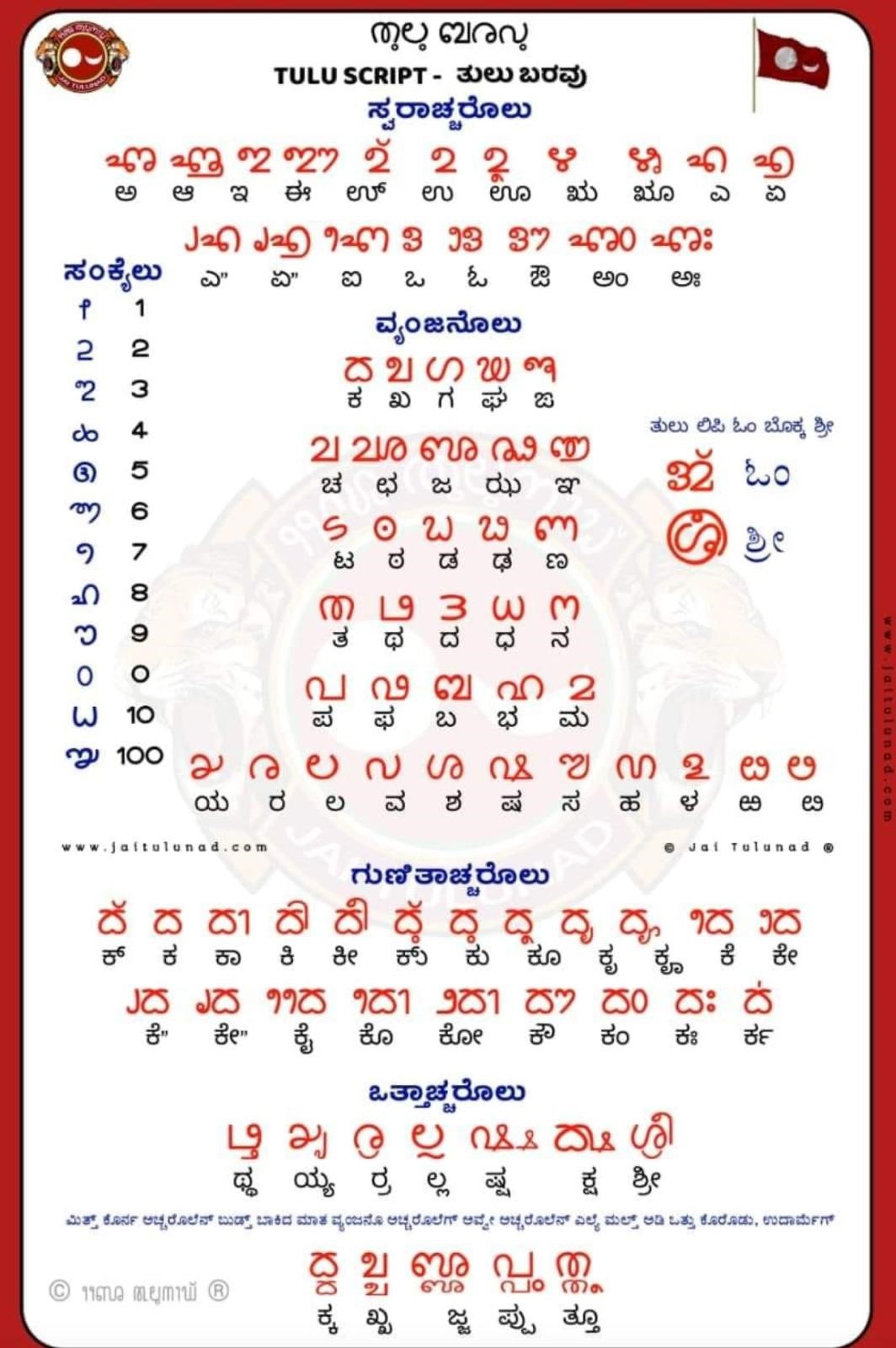 Tulu is not merely yet another language, or a civilization, or a culture. Tulu is a jewel in the crown of our motherland.  Tulu language is oldest among Dravidian groups of languages that are spoken mainly in South India.  Udupi, Dakshina Kannada, and in the northern part of the Kasaragod district of Kerala. The native speakers of Tulu are referred as Tuluvas and the geographical area is unofficially called Tulu Nadu (the Tulu country).

Rev. Caldwell brought out his monumental work called ‘A comparative Grammar of the Dravidian or South Indian Family of Languages’. In his work he justifies that Tulu is one of the most highly developed languages of the Dravidian family. It was this appraisal that opened the eyes of the linguists towards Tulu and made them give due respect and recognition to it as one of the important and developed Dravidian languages.

Tulu Nadu has its own script called Tulu script, Tigalari script. Which is a Southern Brahmic script. It was primarily used for writing Vedic texts in Sanskrit. It evolved from the Grantha script. It is called as Tigalari lipi in Kannada speaking regions (Malnad region) and Tulu speakers call it as Tulu lipi. It bears high similarity and relationship to its sister script Malayalam, which also evolved from the Grantha script. Prof. Gunda Jois has studied this script closely for over four decades now.  According to his findings based on evidence found in stone inscriptions, palm leaf manuscripts and early research work done by western scholars like Prof. B L Rice, he finds the only name used for this script historically has been ‘Tigalari’. This script is commonly known as the Tulu script or Tulu Grantha script in the coastal regions of Karnataka.

Tulu script has been used in Tulunadu for centuries. All Tulu classics discovered recently are in Tulu script, and some in other scripts. This Tulu script was being used by Brahmins. Until recently they were using it for writing Mantras, for accounts etc. For hundreds of years, Tulu Brahmins were going to Kerala Temples for priestly work (called ‘Shanti’ Services). They took the Tulu writing with them to Kerala thus they carried the Tulu script to Kerala. Malayalam had not developed a script of its own by that time. The upper castes and classes of Keralites started close contacts with the Tulu Brahmins and hence they adopted the Tulu script, and later adopted it to what is now called the Malayalam script. (This has been proved in detail by Vidwan P V Puninchathaya in ‘Tulu -Nadu-Nudi’). Dr Punduru V.P says that the Tuluva’s gave Malayalam a script. He says Malayalam had no script of its own script to begin with. The early Malayalam was written in Tamil. The Tamil king Viradapiriyar invented Malayalam script by incorporating the Tulu script into it. This new script was called Tulu Malayalam script.

The world famous Shree Krishna temple Udupi Ashta mutt, till date using Tulu script for official signature. The oldest record of the usage of this script belongs to 1159 A.D. found in a stone inscription at the Sri Veeranarayana temple in Kulashekara, is in Tulu script and language. The various medieval inscriptions of Tulu from the 15th century are in the Tulu script. The earliest available Tulu literature that survives to this date is the Tulu translation of the great Sanskrit epic of Mahabharata called Mahabharato. It was written by Arunabja (1657 AD), a poet who lived in Kodavur near Udupi. Around late 14th to early 15th century AD. Other important literary works in Tulu are: Shri Devimahatme 1200 AD – Tulu translation, Sri Bhagavata 1626 AD – written by Vishnu Tunga. Kaveri (1391AD), Bhagavatantargata Ramayana, Karna Parva, the Vinayaka Havanavidhi.

The oldest available inscriptions in Tulu are from the period between 14th to 15th centuries AD. These inscriptions are in the Tulu script and are found in areas in and around Barkur which was the capital of Tulu Nadu during the Vijaynagar period. Another group of inscriptions are found in the Ullur Subrahmanya Temple near Kundapura. Many linguists like S.U. Panniyadi and L.V. Ramaswami Iyer as well as, P.S. Subrahmanya, suggested that Tulu is among the oldest languages in the Dravidian family which branched independently from its Proto-Dravidian roots nearly 2000 years ago. This assertion is based on the fact that Tulu still preserves many aspects of the Proto-Dravidian language. The Tamil poet Mamular who belongs to the Sangam Age (200 AD) describes Tulu Nadu and its dancing beauties in one of his poems. In the Halmidi inscriptions, there is a mention of the Tulu country as the kingdom of the Alupas. Omkar was initially formed with Tulu alphabet O joined with Ma, it was only much later that Omkar was modified from the Tulu script to its present form.

Squadron leader Pattathmogar Shivaprasad Rai says Tulu has a history of more than 3000 years, one of the Greek play has its 39 lines out of 112 lines written in Tulu script. This is a proof that Tulu was used as a script in all forms of writing. Dr. Pundur Venkatraj Punchitaya was instrumental in bringing people’s attention in existence of Tulu script. In the beginning the Sanskrit was written using in Nandi Nigari script and Devanagari script in north India and Tulu script in South India.  Kiratharjunya novel has character, Vidhyamadhavi’s line written entirely in Tulu script.  The ancient kings of Tulunadu had their administrative laws written in stones across their kingdoms. This shows the extensive use of our Tulu script in our history. A few proof that our Tulu lipi was widely used by the general public. Tulu scripts Engravings found in the clay pots and the brass and copper vessels. Tulu etching on wooden architecture, gold jewelry, existence of old books and account documents written using Tulu script. Numerous old books and account documents are written in Tulu script, extensive archives of works written on ole gari (palm leaf) still preserved today. Out of this Dharmastala cultural and research museum and Udupi mutt have over 2000 such Tulu script works. Over 15,000 of Tulu scripts documents scattered across the globe in various countries.

“Mandara Ramayana” with a coastal tang and flavor of Tulu culture is a unique literary work by Mandara Keshava Bhat. Tulu language is full of innate energy, strength and it is capable of producing epics like Mandara Ramayana even in modern times. The same epic has been rendered into modern Tulu language by many Tulu writers including Malar Jayaram Rai through his collection of anecdotes “Raso Dinji Ramayana”.

Now the question is why such extensively used script went into disuse. Some of the reasons are,  Regain of power coming into the hands of Kannada kings and Tulu people were engaged in industries were unable to devote time as before to write down their literature creations and hence all literature was created and transmitted only orally through the ages. Tulu script was mainly used by Brahmins for writing Mantras. So others were not exposed to the script. Tulu literature written in Tulu was far reaching, not easily available. Tulu was not a medium of studies, not a subject of formal school education. The similarity between Tulu and Malayalam scripts and, mainly because of the use of Kannada script for Tulu by German missionaries during the early stages of printing of Tulu works. The Kannada script has become the contemporary script for the Tulu language gradually. All contemporary works and literature are done in the Kannada script. However, in modern times the Tulu language is mostly written using the Kannada script. The Tulu language is known for its oral literature, in the form of epic poems called Pardana. The epic of Siri and the legend of Koti Chennaya belong to this category of Tulu literature.

Tulu may vanish due to fast dwindling numbers of its users, says Unesco’s study. Which recently conducted a worldwide survey on endangered languages, has cautioned that unless the concerned authorities take immediate steps, Tulu language may vanish by the end of this century”. Unesco also emphasized that efforts should be made by communities, which speak these languages, to preserve them to maintain cultural diversity.

Tulu Sahitya Academy, an institute established by the state government of Karnataka, has introduced Tulu as a language in schools around coastal Karnataka, including Alva’s High School, Moodabidri. Shri Gurudeva High School, Odiyoor. Ramakunjeshwara English-medium High School, Ramakunja. And Vani Pre-University College, Belthangady. Initially started in 16 schools, the language is now taught in over 33 schools, of which 30 are in Dakshina Kannada district. More than 1500 students have opted this language. The Government of Kerala established The Kerala Tulu Academy in 2007.The Academy focuses on the retrieval and Propagation of Tulu Language and Culture in Kerala through various activities such as Organizing Seminars and Publishing Tulu periodicals etc. The Tulu Academy is based in Hosangadi, Manjeshwar in Kasargod. The new K.S.R.T.C bus stand premises in Kasargod town is named as Tulunadu bus Terminal cum Shopping complex Kasaragod.

Tulu is also taught as a language at the postgraduate level in Mangalore University, and there is a dedicated department for Tulu studies, Translation and Research at Dravidian University in Kuppam Andhra Pradesh. The Government Degree College at Kasaragod in Kerala has also introduced a certificate course in Tulu for the academic year 2009–2010. It has also introduced Tulu as an optional subject in its Kannada post-graduation course. It has adopted syllabi from the books published by the Tulu Sahitya Academy.

German missionaries Revs. Krammer and Männer were the first people to conduct research on the language. Rev. Krammer collected about 3,000 words and their meanings until he died. Later his work was carried on by Rev. Männer, who completed the research and published the first dictionary of the Tulu language in 1886 with the help of the then Madras government. The effort was incomplete, as it did not cover all aspects of the language. The Govinda Pai Research Centre at MGM College, Udupi started an 18-year Tulu lexicon project in the year 1979. The Tulu lexicon was awarded the Gundert Award for the best dictionary in the country in 1996. In September 2011, the lexicon Academic Council of Mangalore University accepted a proposal, to allow the university and the colleges affiliated to it to offer certificates, diplomas and postgraduate diploma courses in Tulu, both in regular and correspondence modes.